After the circus starts, the White House tries to put a pretty face on a clown... 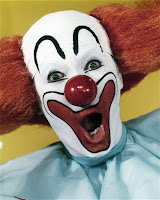 Almost three weeks ago, we noted Joey "Botox" Biden's clown-like comments on national television regarding the terrorist trials to be held in a civilian court:


On NBC’s Meet the Press on Sunday, Feb. 14, host David Gregory asked Vice President Joe Biden, “The reason for a civilian trial as given by the president and others was a question of perception: That it was very important that the rest of the world see that we treated Khalid Sheikh Mohammed fairly. But hasn’t the administration already made the decision that even if he were to be acquitted that he would never be released?”

Biden answered by guaranteeing that Khalid Sheik Mohammed would not be acquitted.

“Look, there is no doubt that he would not be acquitted,” said Biden. “The facts we have are overwhelming. We are absolutely confident he will be convicted and for whatever he is tried. The attorney general made the decision that he should be tried in the court of the greatest jurisdiction, which was in New York City.”

The today we learn:

The review of where and how to hold a Sept. 11 trial is not over, so no recommendation is yet before the president and Obama has not made a determination of his own, officials said. The review is not likely to be finished this week.